I tried to kill myself at Yale University when I was a student there 51 years ago. Returning to the 50th Reunion of the class of 1966, the class I didn’t graduate with, I sought closure to what has always been a painful experience.  A friend from those undergraduate years invited me to come. I was reluctant, but he said it would be good for me. Relenting after several invitations, I decided this was an opportunity to find peace with what were not, as the Yale’s college song begins:

The shortest gladdest years of life…”

The feeling of alienation began the first day I walked onto the freshman commons. I had been accepted on the waiting list because, I figured, the Davis family had numerous men who attended Yale. My grandfather was in the class of 1914. His brother graduated in 1907. My father was in the class of 1943, but he never graduated. His failure put pressure on me to uphold the family tradition. I didn’t want to attend Yale, but my SAT scores were not good enough to get a scholarship to Northwestern, where I wanted to go. The family decided the university was too expensive and would not fund me. So I was confronted with the choice of going to a school that was my last choice or going into the Marines. I was leaning towards enlisting. But Yale accepted me, and the family said they would support me. I thought I was stuck. Go where the family wanted me to go, or go into the military and likely end up dead in Vietnam.

Everyone I met a Yale seemed so much smarter than I was. They were class valedictorians, had extraordinary talents, and spoke numerous languages. I had no known talents, nor did I really know what I wanted to do with my life. I fantasized becoming a writer, but that idea was soon crushed. The privilege of an Ivy League university didn’t seem so wonderful to me.

In the freshman dormitory up in the fourth floor double room, I struggled with all my classes. Foreign language training was required. I took French, but I couldn’t seem to retain or understand the language. I spent hundreds of hours in the language lab, only to go to class unable to comprehend what the teacher was saying. Decades later, I learned why. I am dyslexic with sound comprehension one of my minimal brain malfunctions. I barely passed the first year of two required years of a foreign language. The second year I failed.

All the other courses required writing papers. English class was hardest of all. Weekly and sometimes daily essays were required. I had a Smith Corona manual typewriter, and had taken one class after high school to learn how to use it. I wasn’t very proficient. At my desk looking out the fourth floor window onto the commons, I tried to type the required papers, but the effort was totally frustrating. I was slow and could only hunt and peck letters, but even worse, words would come out backwards. The word “the” is common in English, and seems to exist in almost every sentence.  When I typed it, “the” came out “hte” again and again. I would get out the white out, blank out the mistake, and type again, concentrating hard to get the word right. “The” continued to be “hte.” Gradually I became more and more enraged as I stared out the window into the late night darkness of the commons.  Unable to control the mounting anger, I threw open the window, picked up the typewriter, my sheet of typing still in it, and tossed it out the window.

After sitting in my chair until my rage abated, I thought “Well that was stupid.” I went downstairs and out into the grass to search for the typewriter, which I found slammed into the earth, its carriage wracked. I bent it back into the rectangular shape. All the keys worked, except for the “W,” which was permanently wrecked. I didn’t try to type my papers after that. I hand printed them, and got crummy grades because a Yale student was expected to hand in typewritten essays. My fantasy of becoming a writer withered.

Poor grades, drinking, and violence (I put a fire ax in a door at a party in a drunken state on a dare), was my undergraduate history. Too much family pressure to succeed where my father had failed followed me around the campus. Too much emotional pressure haunted my travels on the streets of New Haven. By the middle of the junior year, I was failing all my courses. I was drinking heavily. My roommates wanted me to move out because I was acting so weird.

I was forced to go live by myself in a garret room up a narrow coiling stairway on the top floor of an entry tower. I felt like an exile.  There on an April night in 1965, I took 150 aspirin tablets and gulped down a bottle of scotch. When the world started to spin, and a roar began in my ears, I called for help from a friend. He came with the campus police, and I was rushed to the hospital. My stomach was pumped and I narrowly survived the night. I pleaded to live as I listened to the death rattle of a man in the bed next to me.

My undergraduate campus life at Yale ended. It was the best thing that had ever happened to me. After a short stay in the mental ward of Yale New Haven Hospital, I moved into a community residence and found a job. I discovered there was a whole world beyond Yale, and I found things I was good at. Art and design became my life once I graduated from Yale and the Yale School of Architecture. I never returned for many years.

These feelings changed when I returned to the 50th reunion. I walked around the campus, looked at the freshman dormitory where I had thrown my typewriter out the window, and laughed.  I walked along the street and looked up at the little window in the garret room where I had tried to kill myself. It no longer had any emotional connection for me. I saw the campus in a new light. It is a beautiful place to get an education. The buildings have stood the test of time and look attractive. The campus is filled with pleasant walkways lined with lovely green trees. Closure bloomed. 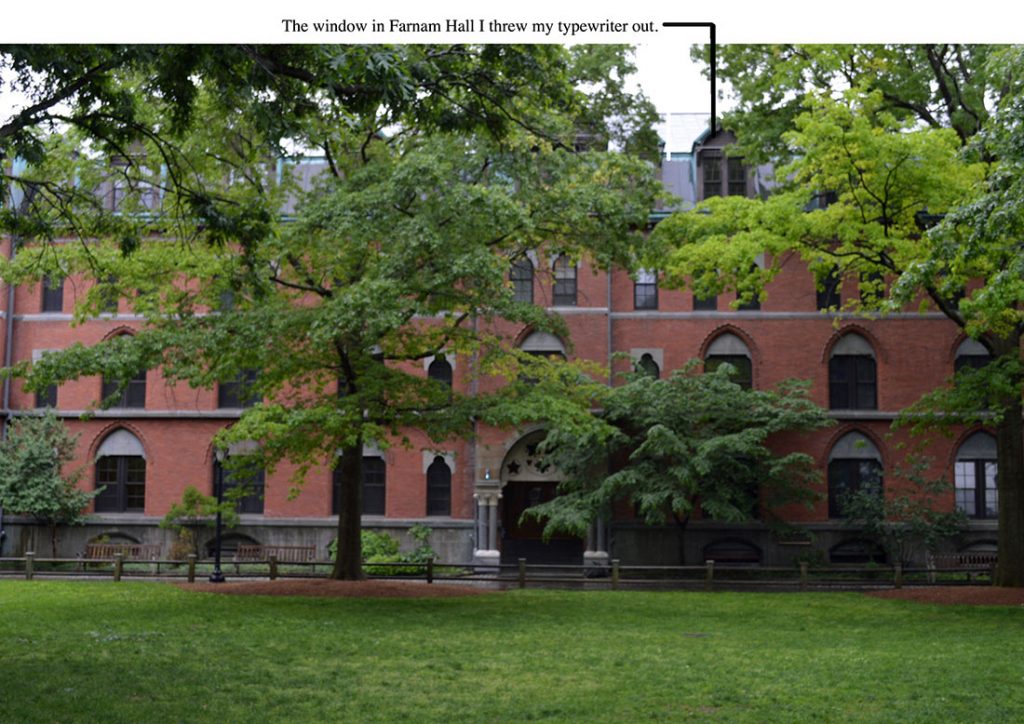