From Traffic Cop to Ted Talk

From Traffic Cop to Ted Talk

It was in March of 1990 when I pinned on my badge, took the peace officer oath and began my career with the California Highway Patrol (CHP). I was stationed in Alameda County – Hayward to be exact, just south of Oakland, California. A busy place with a high auto collision rate and higher than normal crime rate but also with a lot of kind, friendly, hardworking people. I learned a lot over the next four years there as I waited for an opportunity to transfer to my home in Marin County. Finally, in 1994 my wish came true. The 50 plus mile commute each way through the busiest bay area freeways would be reduced to just 17 miles. I had finally made it home.

As I began working in the Marin Area I quickly noticed officers did not want to work the Golden Gate Bridge (GGB) beat. Being low man on the totem pole I was assigned there frequently. As I worked my way around I began to meet GGB staff and would chat with them about any concerns they had regarding traffic. To my surprise most of them would bring up suicides that commonly occurred on the bridge. I grew up in Marin (Marin County connects to San Francisco via the GGB) but had no idea the high number of individuals who took their life by jumping from the bridge. As I would find out rather quickly, the GGB has the highest rate of suicide of any single location in the United States. I soon understood why many officers did not want to work the bridge. Due to a lack of training in crisis management and suicide prevention, they did not want to handle the suicide calls in fear of losing individuals. Additionally, only one officer was assigned to work the GGB area which included several miles of freeway on either side of the bridge, and the parking lots surrounding the bridge which seemed to be always be packed with tourists. With tourists came those who prey on them. Car break-ins occurred often, ruining the vacation of tourists who traveled thousands of miles to see the beauty of the bridge.

In addition to the “regular” law enforcement calls, I soon grasped there was another call that I would unfortunately be responding to on a regular basis while working the GGB. It was “10-31” – a suicide attempt. Each person I would encounter standing over the pedestrian rail on what is called the “chord” (an I-beam that parallels the bridge) was in immediate crisis and prepared to jump. In my early career of law enforcement I was not trained in handling these situations, and while I responded to every 10-31 received, I was burdened by a feeling of helplessness to assist.

What really bothered me as I came upon the person over the rail was the look in their eyes. Their eyes revealed cries for help, unbearable pain, and suffering. I could feel that most of them truly wanted to live but were in such internal turmoil and agony, they could not see past their emotional and physical pain.

I began doing research on crisis management and suicide prevention on my own at the local library. I searched out seasoned officers and GGB staff who had experience in these matters to have conversations and actively listened for any information I could glean to use on my next call, with the hope that the information would result in a positive outcome. Through my research, I discovered there was a basic course where officers could learn about handling calls of people in crisis. The course was called Crisis Intervention Training (CIT). I did finally attend a CIT training program, and towards the end of my career I was extremely fortunate to attend the Federal Bureau of Investigations Crisis Negotiation course. Both are phenomenal training courses and I highly recommend them to any peace officer.

Throughout the years on my beat and on the bridge, I have spoken to hundreds of people contemplating suicide. Most suffered from depression. Using my experience, training and listening skills, I count myself as humbled and fortunate in being able to intervene in a very personal, precarious and negative situation for more than 200 people, and walk them away from their crisis to seek help. A higher power than me is responsible for the words, attitude, demeanor, tone and conversation that flowed back and forth as we worked together to discuss and diffuse the circumstances that brought the person to the brink of an abyss.

After working in an environment fraught with accidents, injuries, violence and death for years, I failed to realize I also was suffering from depression. It manifested itself silently and maliciously in my life. I found I could go to work and function at 100%. Everything seemed fine. It was not until I was off duty that depression would take over my daily life. I found myself sitting on my couch for days at a time. I did not want to do any sort of activity and found it a battle just to go after groceries, visit my two boys or walk my dog. This quiet and destructive inactivity at home went on for a period of years and I got used to the boring repetition – I just figured that is how life is. I was just too tired to do anything. During a routine physical while speaking with my doctor, it was determined I suffered from depression. Currently, I take medication to address the diagnosis and have gone through eye movement desensitization therapy. I tell you without a shadow of a doubt the medication and therapy have truly helped me.

I went into the CHP because I wanted to specialize in traffic – investigating accidents, vehicle code enforcement and assisting those disabled on the road. I had absolutely no idea my life would change its pace and allow me to encourage and influence people the way it has – a TED Talk, Access Live television, a book, movie rights, traveling throughout the USA and to six countries presenting my work in suicide prevention and crisis management to thousands and thousands of people. It is humbling and an honor to be able to not only personally encourage people and teach them ways in which to change their behavior and seek help, but to teach others to do the same. If, by telling my stories, I can provide courage to others to seek help, gain the ability to have that courageous conversation to someone in crisis, or simply be an advocate to help de-stigmatize getting help for or recognizing a mental illness, then the real reason of why I went into law enforcement in the first place – to assist others – has been accomplished.

You can learn more about Kevin and his work on his website PivotalPoints. 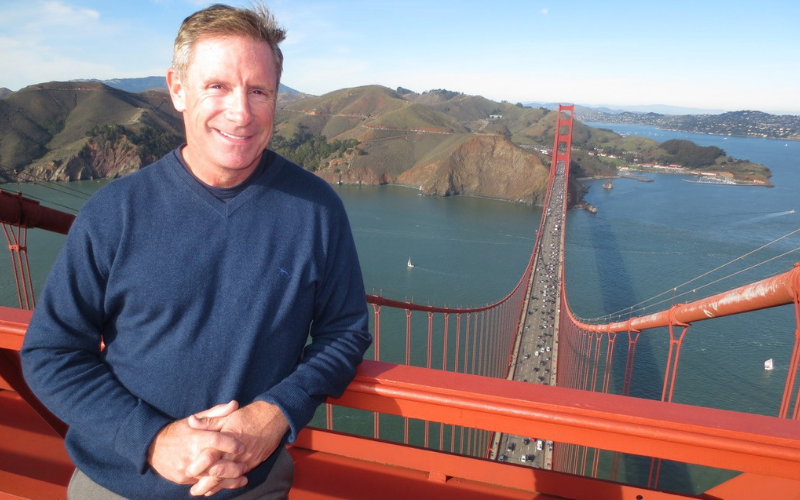 About the Author: Kevin Briggs

Kevin is a speaker, author and veteran. He wrote the book "Guardian of the Golden Gate." His website is Pivotal-Points.com
<h3 class="title-heading-left" style=